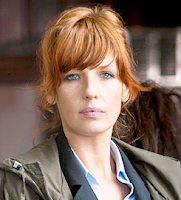 Premise:  Anna Travis (Kelly Reilly) is a rookie detective constable who works for the Metropolitan  Police. Her middle-aged boss, DCI James Langton (Ciarán Hinds), takes an active interest in Travis, in part because he knew her detective father and in part because he finds her attractive. Anna's first days with the Langton's team are challenging: she throws up at the autopsy and her female colleagues are put off by Anna's choice of work attire (e.g., high heels, tight skirts). Gradually, though, Langton recognizes that Anna is an intelligent investigator with great promise. Her first case involves a serial killer who has murdered women periodically over an eight-year period. The prime suspect is a handsome film actor (Jason Durr), who soon becomes enamored with Anna.

Status: Four seasons, comprising 11 episodes, aired between 2009 and 2012. The first two seasons can be streamed on Acorn TV.

Production Notes:  Former British actress Lynda La Plante created Above Suspicion, basing the teleplay on the first of her Anna Travis detective novels. La Plante, who is best known as the creator the classic detective series Prime Suspect, has written nine Anna Travis books. In the novels, as well as the series, Travis progresses through the ranks of the Met Police, rising from Detective Constable to Detective Chief Inspector. In a 2011 interview, La Plante compared Travis with Prime Suspect's tough Jane Tennison: "Anna Travis is a fast-track detective, never having been in uniform, and without the discrimination level that Tennison had to deal with. What interested me was that Travis has a university background as opposed to street experience. Gradually, we also see how Anna Travis grows into a formidable female detective and becomes as tough as Tennison."

Our Review:  Above Suspicion is a solid detective series well acted by its cast. Its protagonist, though, makes too many sloppy mistakes in the first episodes--even for a rookie. In one case, she sleeps with a journalist whom she has just met, thus inadvertently giving him the opportunity to read her case notes. Kelly Reilly makes Travis a fresh, appealing character. However, her 24-year age difference with co-star Ciarán Hinds add an Oedipus Complex angle to their characters' sexual attraction.

Email ThisBlogThis!Share to TwitterShare to FacebookShare to Pinterest
Labels: Above Suspicion