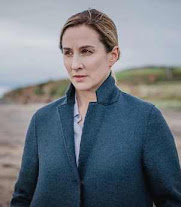 Premise:  Detective Sergeant Lisa Armstrong (Morven Christie) is a family liaison officer in Morecambe Bay. When a pair of teenaged twins go missing, she and a new detective constable (Taheen Modak) are assigned to interface with the troubled family. Imagine Lisa's surprise when she discovers that the twins' father is the same man with whom she had a alleyway sexual encounter the previous night! While working on the case, Lisa also has to cope with her rebellious teenage daughter and son. Fortunately, her mother provides some stability for the family.Running Time: 60 minutes.

Status: Two seasons, comprising 12 episodes, aired between 2019-2021. A third season has been commissioned.

Production Notes:  Morven Christie, who previously starred in Grantchester, decided to leave The Bay in 2021. She will will be replaced by Marsha Thomason (White Collar), who will play a new detective sergeant for the West Lancashire Police Service.

Our Review:  The Bay is a moderately successful attempt to blend crime and family drama. Morven is an appealing lead, which helps the viewer overlook her character's incredibly poor decisions during the first season. The Bay improves during the second season as the focus broadens to include more background on Lisa's boss (Daniel Ryan) and her partner Med (Modak). It also helps that the guest cast includes several actors known for other popular crime shows: Stephen Tompkinson (DCI Banks); Sharon Small (Inspector Lynley and London Kills); and Steven Robertson (Shetland).

Email ThisBlogThis!Share to TwitterShare to FacebookShare to Pinterest
Labels: Bay