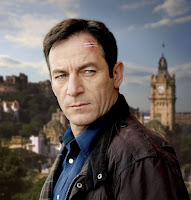 Premise:  Police detective-turned-private investigator Jackson Brodie (Jason Isaacs) has a lot on his plate. Clients certainly aren't lining up at his door. His ex-wife is concerned about his parenting skills in regard to their 10-year-old daughter (and rightly so). He and a former colleague, Detective Inspector Louise Munroe, share a mutual attraction (although their timing stinks). And, perhaps most significantly, Jackson is haunted by childhood memories involving his murdered sister. Jackson's cases sometimes dip into the past, such as the search for a woman who disappeared from her family's garden 30 years earlier at the age of three.

Production Notes:  Author Kate Atkinson introduced Jackson Brodie in her 2004 critically-acclaimed novel Case Histories. She has written a total of four Brodie mysteries, three of which were adapted for the TV series. Her books took place in Cambridge, but the series transferred the action to Edinburgh.

Our Review: Case Histories is an enjoyable mystery series anchored by Jason Isaacs, who makes the melancholy Brodie a champion of lost causes. He gets strong support from Millie Innes as Brodie's daughter Marlee and Amanda Abbington as DI Munroe. The frequent flashbacks involving Brodie's murdered sister become annoying, but this is still a well-done, quirky show that deserved additional seasons.